AdWords Management
Where have your Google Ads gone?

Google has changed the way adverts appear and with these changes they’re definitely not taking hostages. Are you a victim of Google’s 80/20 rule?

The guys at Google have decided to mix things up a little this week and we have seen a major change in the way that the ads are shown on a Google search.

On February 19th 2016, Google confirmed that the search results page on desktop will no longer show text ads in the right hand sidebar. Instead, as many as four text ads will be displayed above the organic listings as well as three text ads at the bottom of the page.

Historically the guys at Google know that 2% of their advertisers were getting 50% of sales and this information is staggering. No wonder Google has looked at the Adwords audiences and thought that if according to Pareto principle 80% of their revenue comes from only 20% of their customer base, and despite their best efforts, the remaining 80% of their customer base just simply cannot afford to spend more money on advertising, then there’s no point in focusing on them and decided to implement this law on themselves. Their efforts have shifted entirely to the 20% of customers that bring them the 80% of their revenue.

If you only rely on organic search you may have to look at other options.

This change comes with no surprise, after news has spread that Google is expected to pay more money on taxes in the UK, they are being held between a rock and a hard place. On one hand they have the big guys saying they need to reduce their expenditure and increase revenue on the other they are faced with increasing competition from Facebook and Amazon.
What they’ve done is they have turned off all of the lower performing ads and are now helping the big players with the capability to invest. How do they do this?
From now on, no text ads will appear on the right side of the search results on desktop searches. Meaning that there is more competition for those premium spots.

Although Google’s confirmation that they will no longer be showing text ads in the sidebar on desktop searches came as a surprise to many, it’s been on the cards for quite a while. Google has been testing several ideas for a number of years now.
They originally began experimenting with four ads above the organic results back in 2010 on queries regarding mortgages.
As recent as last year, many users began seeing four ads at the top of search queries, with no ads appearing in the sidebar. We can see that Google has been testing Search Engine Positioning results with 4 ads on top for a while, before finally making the big change. 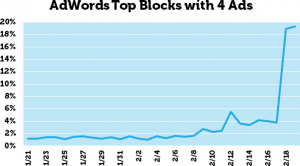 What does this mean for you?

Well first and foremost Google is likely to compensate for the lack of side ads by increasing the number of top paid ads for competitiveness. Meaning more competition for these spots and increasing costs unless you’re smart about it.
Secondly, the biggest effect will be that the organic results will face a further squeeze. It’s already difficult to view organic results above the fold for product searches, with this change it will become increasingly more difficult.
Thirdly, the biggest effect is being seen in the US, competition is far more fierce than in the UK and we suspect they have a slightly different version running from the one that we have in the UK. The main issue is that shopping ads take the top positions leaving only one text ad and therefore if you’re not the first ad being shown, shoppers won’t see your ad at all. This can be seen on the example below. 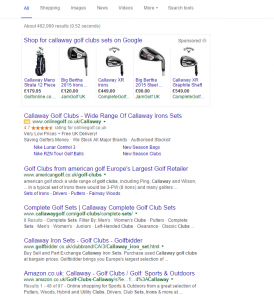 Fourth issue concerns the alternatively shopping layout that is running in the US since last year and its now increasingly prevalent in the UK. The normal shopping listings are replaced by single product shop image followed by a list of retailers and their price. This format normally doesn’t feature any text ads. This example can be seen below. 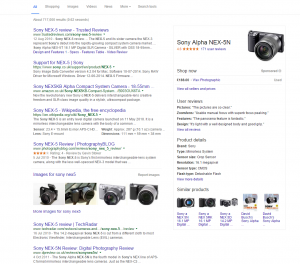 What we have observed is that in some areas, such as travel and insurance, where Google has its own comparison products, organic visibility is even worse.

There are exceptions though, there are a couple of search types where the right hand side adverts will still be used.

What we are witnessing now is that the impression share is dropping even though the click through rates have remained the same as well as the costs for those clicks because more searches are being made.

Keep an eye on the auction insights to see the drop off in competitors.

For many advertisers this means the difference between running a very effective advertising strategy or going bust.

So in summary, in order to pose as competition for the big budgeted companies the main changes that you will have to look at are: