On Monday, I began my first week at Click Convert. My role within the team is to create and update content. The team here really are experts in what they do, and they’re keen to share their knowledge. Together, we’ll be developing a host of helpful information surrounding Google Ads, Microsoft Advertising, Facebook and Amazon. 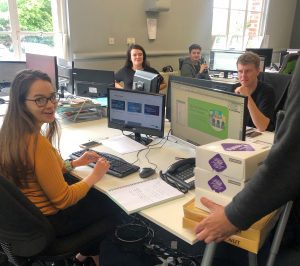 An Introduction to Google Ads

On day one, I received a whistle-stop lesson on Google Ads. Having worked in a marketing agency previously, Google Ads had always been viewed as an ‘extra’. We had focussed on text ads, so I was surprised to find that the team here generate the majority of their sales from shopping ads.

When guidance was needed in my previous role, I would naturally refer directly to Google’s advice. At Click Convert, the team quickly pointed out that Google is a business. Their guidance might work well for Google themselves, but it usually doesn’t work best for clients. There are a series of ‘loopholes’ in Google’s system that the team work to maximise on. Using flaws in the system, they’re able to control the keywords in a shopping feed and achieve conversions at lower costs.

In my previous role, the aim of Google Ads had been to generate traffic to a client website. Here at Click Convert, the focus is on creating quality traffic. Negative keywords are as important (if not more important!) than keywords. Limiting traffic is vital to ensure higher conversion rates.

I’ve spent much of the past week familiarising myself with Click Convert and getting to know my new colleagues. Already, I’ve learned a lot! I’m eager to see what’s to come here at Click Convert and I’m looking forward to producing content to support the company’s next stage.